To be frank I rejoiced when Allen and Heath released the XB14 broadcast mixer aimed at
the affordable end of the radio market. I was just pleased a manufacturer would be bothered
to take an interest in the somewhat neglected area of specialist radio mixers and that having
a wealth of experience in building mixers for the hotly competitive music market that radio
would get a proper mixer at an attractive price. And so it turned out. Which leads us to
the XB10, a little brother to the XB14 and even more affordable or cheaper, whichever you
prefer. 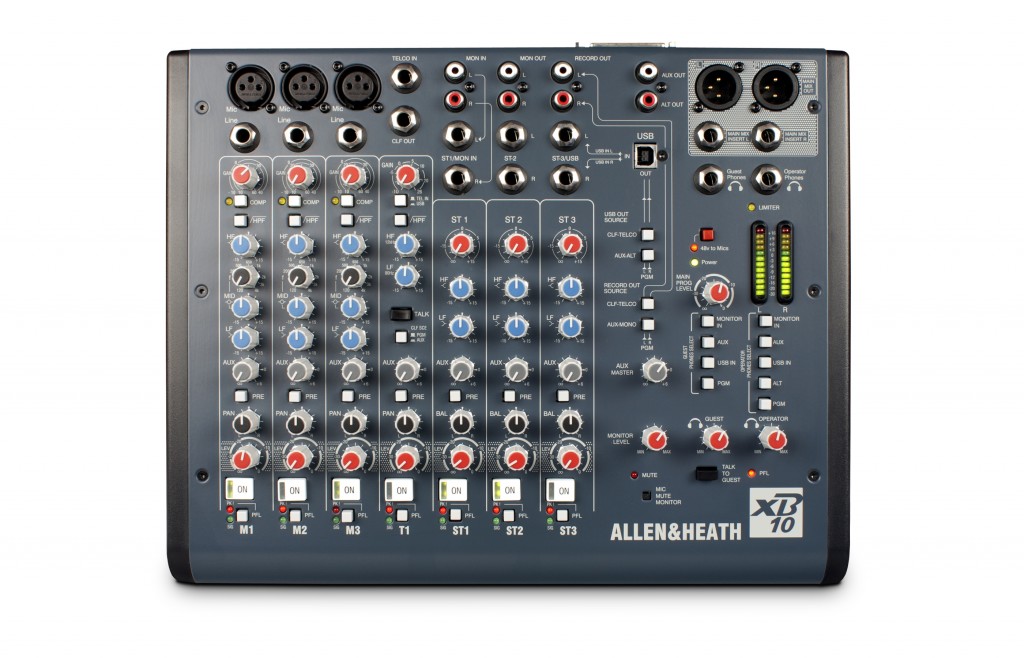 The XB10 is teeny tiny but solidly built mixer featuring three mic inputs a telco input
and three stereo inputs on quarter inch jacks. It has a fully duplex usb (1.1) interface built
in, main outputs on xlrs, complete with inserts and variable limiters. As befits a broadcast
mixer the XB10 is stuffed full of radio friendly features. Nice to see 60dB of gain and a
swept mid eq on the mono channels, there’s simple high and low filters on the Telco channel
and the stereo inputs have high and low eq available.
Each microphone input has a built in ‘compressor’ which applies ten dB of gain at low
levels, has a soft knee at a fixed minus 20 dB and a limits at the top end. The channel gain
seems pretty clean and usable up to the 60 dB limit. You can hear the dynamics working if
you max it out but with a little common sense applied to the gain structure, you get a very
acceptable result.
Each channel has a latching ‘ON’ button. When the channel is ‘ON’ it is mixed to the
programme bus and is availale to send to the Aux bus pre or post fader. However deselecting
the ‘ON’ function routes the channel to the Alt bus and the Aux send is prefade only. This
allows you to quickly set up a seperate mix on the Alt bus that is not going to your main
output.
You get even more flexibility with the record output which can be configured for rapid
recording independent of the main output.This is especially handy when used with the Telco
input. The telco channel is on a quarter inch jack as is the clean feed output, the clean feed
has its own talkback and a choice of sources. You can plug your standard telephone hybrid
into the telco channel or if using Skype this can take the USB input to the mixer from your
computer. If you send your presenter mic to the Aux prefade and select Aux to provide
clean feed then the ‘Cleanfeed and Telco’option on the record output allows you to record a
quick phone interview while the mixer is happily replaying some music or other audio from
one of the stereo inputs. Or you could knock off some links or a quick studio interview using
exactly the same principle. Both the Aux and Alt busses are available only in mono.
Using the telco input is just one way of getting the output of your computer on to the
XB10, while the telco option gives you a mono feed of the USB, input channel ST3 (stereo
three) is normalled to the USB input and is a stereo feed. One neat little feature on both the
telco and stereo inputs is that the USB feed arrives via the chanel trim pot. This means that
1
after setting up your levels initially you can set your preferred working range for the channel
without having to continuously fiddle with the computer settings and if you are working the
telco input direct to the record output you can still set levels on the channel trim.
There’s also a seperate stereo monitor input on phono connectors. This feed is normalled
to the input Stereo 1, broken away when you plug a source into the jack inputs of the channel.
Broadcast bunnies have special monitoring needs and in the XB10 this is reflected in quite
a complex monitoring panel. There are two discrete headphone outputs, operator and guest,
both with individually switchable feeds and a talkback to the guest output. Like the clean
feed talk back this is derived from the input to Mic1, though you can change this to any
of the mono channels using internal jumpers. The selector banks are additive (reminding
me of Audio Developments mixers) so you can monitor Aux and Alt outputs by depressing
both selectors. There’s also a seperate pot for the monitor output and the option to mute
the monitor output when any of the mics are selected to the programme bus. A word here
about mic switching — as far as I can see most of the radio world mixes on the ‘ON’ switches
(I suppose similar to mixing on the mutes on a music desk) — generally BBC types prefer
the faders and therefore rely on microswitches in the faders switching off the monitors as
the fader or pot is opened. Not withstanding the operational arguments, mixing with rotary
pots is much harder than with linear faders so using the switched approach makes better
sense. While on the subject of different ways of working, the channel pots on the XB10 all
max out at 0 dB, ie there’s no extra gain in the channel pot — though of course you have
plenty of gain at the trim pot — again this is normal operation for ‘self op’ radio.
The record outputs are on phonos and are switchable between main out (pre the master
gain control) and either an Aux — Mono split or a Telco — Clean Feed split. You get the
same flexibility for the feed to the computer via the USB. The telco/clean feed option allows
you to send clean feed to Skype (other VOIP apps are available) while enabling you to record
the interview on the computer at the same time.

The main outputs are fed from the master gain pot and appear on XLRs, there are
unbalanced inserts available on quarter inch jacks. Unlike the XB14 the XB10 includes
output limiters. The controls are deliberately non user friendly, they’re on the back panel
and require a ‘tweaker’ for adjustment. While you’re round there you’ll find the 25 way D
socket with logic control outputs for remote starts, mic monitor cuts, external mutes and
the like.
I plugged the XB10 into my XP PC and within two minutes Windows had sorted itself
out and playback and record worked without drama. OSX Lion too exhibited perfect plug
and play. If I had a niggle about the XB10 it would be the lack of multiple computer outputs
via USB, many stations run completely from software play out and the option to mix the
outputs on the desk without additional hardware is the way forward.
Not all great products are hand built and cost a fortune, and the XB10 is a perfect
example of a great product that is primarily great because it has been well thought out.
I can see definite improvements over the XB14 — the dynamics being a case in point —
and the 10 just packs in loads of broadcast friendly features in a small footrprint at a very
attractive price. For internet radio, student radio or a radio mixer for a small ob this is
unrivalled. Marry this to a low cost playout system (try StationPlaylist) add a mic and
some headphones and there is nothing to stop you being the next Chris Moyles — if your
not careful.
2